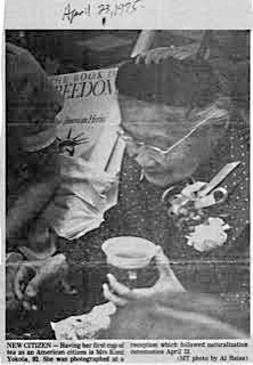 One of my inspirations for “Them” was Mrs. Yokota, who raised my mom after her mother died when she was 6 years old. This quote is from a paper in Medford, Oregon where Mrs. Yokota lived for almost 60 years, her picture is  below from that article. “Mrs. Kimi Yokota came to America in 1916 [from Japan]. She and her husband worked 18 hours a day in the sugar beet fields, in the orchard they leased, and raised chickens, turkeys, and cattle.  She never felt a grudge against anyone for her incarceration in the camps.‘I want to pass away as an American’.” Japanese immigrants weren’t allowed to become citizens until 1952, and in 1975 at the age of 92, Mrs. Yokota became a citizen. She died when she was 96 years old and never went back to Japan.