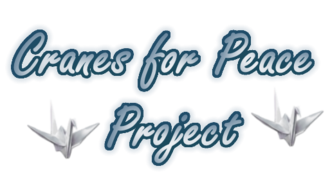 Legend says that if you make 1000 cranes your wish will come true. 1000 origami cranes will be made with each individual’s wish for peace written on the back of the origami paper and folded into the crane. These cranes will be strung together to make a chain of 1000 and will be placed on Sadako’s Children’s Memorial in Hiroshima, Japan. Sadako was two years old when the A-bomb was dropped on Hiroshima and she died of radiation poisoning when she was twelve. Sadako Sasaki was a Japanese girl living in Hiroshima when the atomic bomb was dropped on Japan (August 6, 1945). In 1955, at age 11, Sadako was diagnosed with leukemia, a type of cancer caused by the atomic bomb. While in the hospital, Sadako started to fold paper cranes. In Japan, there is a belief that if you fold 1000 paper cranes, then your wish will come true.  Paper was scarce so she used the paper from medicine bottles, candy wrappers, and left over gift wrap paper. Her wish was that she would get well again, and to have peace in a world free of nuclear weapons.

After Sadako’s death, her classmates raised money to build a memorial to her and all the children that were killed by the atomic bomb.

Chains of cranes are displayed in glass cases next to the memorial that have been sent there from all over the world.

OUR VISIT TO SADAKO’S CHILDREN’S MEMORIAL IN HIROSHIMA, JAPAN